When you understand the symbolism behind Baphomet, then put it into practice. Then you are on the path to illumination.


The Modern Esoteric Temple Of Baphomet is for those who wish to show respect, honor, worship and dedication to the Ancient Ones and the almighty Baphomet (Spiritual Baphometism). 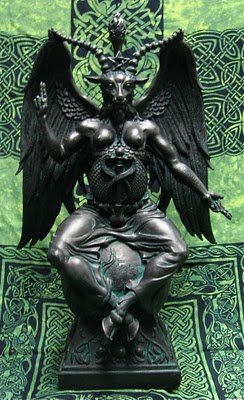 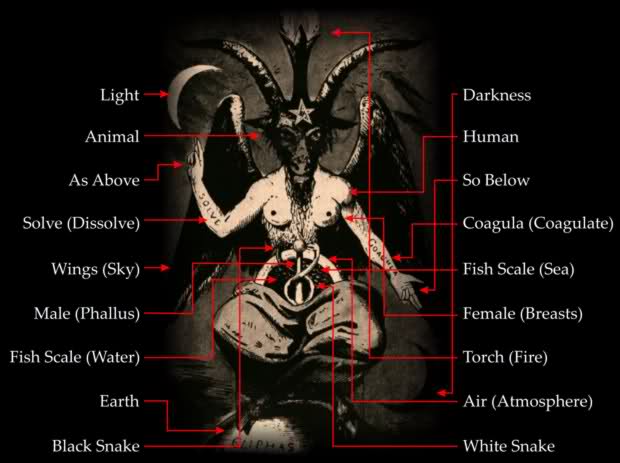 Almighty Baphomet has many images that are of symbolic significance. When you understand the importance of these symbols and their meanings, then you can put it into practice in your life and move down the path to illumination. This photo of the almighty Baphoment shows an example of just some of the symbolism and meanings in brief. I will be going over the meanings of these symbols listed here in this photo above in more detail plus more. I will be also explaining how to apply this to your life.
THE NAME BAPHOMET :

The name Baphomet go`s way back to the 14th century and is believed to have a connection with the Knights Templar. It is thought the name Baphomet is another name for Muhammad the prophet. In the 19th century Occultist/writer Eliphas Levi created the image of Baphomet as you see it here on this page. He created the image of Baphomet featuring many symbols with many different meanings which I will be explaining to you here on this page. There is a bigger and deeper meaning behind the image of the almighty Baphomet than what meets the eye at first glance. Let me explain something, over the many years a lot of very powerful knowledge from the Ancient Ones that we could use to empower our lives. This was passed down through the ages by those that have hold of this knowledge. The knowledge was passed down through word of mouth, in the form of signs and symbols in artists paintings, poems, legends, folklore, sketches, diagrams, drawings, images like this image of almighty Baphomet, hidden scrolls that they hoped would be found in the future, manuscripts, grimoires and more. The reason this special and powerful knowledge had to be so secretive is due to dominance from the rise of the dogmatic modern religion. This religion is called Christianity and the fear of death by hanging or being burnt alive ordered by those in authority sworn to serve this religion. This was not always the way and before the coming of that age people openly served the Gods/Ancient Ones and learnt a lot from them through a strong devotion and dedication to the Ancient Ones. People had a strong connection and full communication with these Spiritual Beings. As it had to go underground it was named Occult which this word basically means In Secret/Secret Knowledge/Secret Teachings. This also brought about secret organisations/groups which continue to this day. However even though a lot of knowledge that was passed on to us humans by the Ancient Ones has been lost from many manuscripts getting burnt in the Dark Ages. Also those people today who are in power holding onto secret magick practices in order to try and control the world’s public. By leaving the public in the dark while all the time using this knowledge for themselves in ritual and ceremony. I will also add that this is why the world is in so much trouble, a lot of people in this world are disconnected from the Ancient Ones/Old Gods. As many of these Ancient Beings/Gods have been demonized as part of the propaganda of fear bought on by the early movement of Christianity. Due to this religion being good at doing this, through many generations this mind set is still in the back of our minds. By the way the word Demon that the religion of Christianity uses is a corruption of the word Daemon/Demigod which means a Divine Being. So often I will be using the word Daemon as opposed to the word Demon on this page. Thankfully we are now moving into a different age, secret knowledge is being shared, secret esoteric groups are sharing their information. There is a shift in consciousness, people are becoming more open minded, Enlightenment or what I call Illumination is starting to take place. What we now have is pieces of information in this information age that we need to put together to bring us back to a connection and in direct communication with the Ancient Ones through the almighty Baphomet 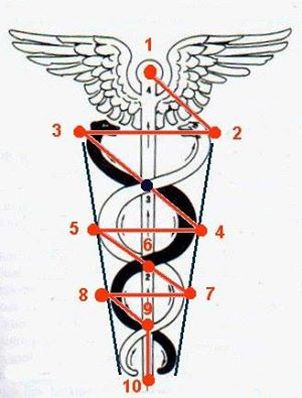 If you take a look at the image of our almighty Baphomet you will notice that there is two serpents entwined around a staff or rod. First of all I want to talk about the serpent in it self and it`s meaning and symbolism. From the start of time the serpent has been seen as a powerful spiritual force or energy and a God in many religions. Many religious paintings, artwork, diagrams and deities have featured an image of the serpent in most religions and cultures, primitive and modern. This in itself has meant that the serpent has and still does play a big part in our origins and existence as human beings here on earth. In some cultures the serpent is represented as the dragon. To me the ancient serpent represents creative energy, ultimate wisdom, regeneration, healing, change, rebirth, spiritual power of the universe that protects, transforms and supports life. In the story of the Garden Of Eden from the Bible the serpent was the one that opened Adam and Eve`s eyes up so that they could what was really going on. So that they could make their own mind up and have their own independence. To give them freedom from a controlling situation they where in but knew no better at the time till the coming of the serpent. The serpent brought enlightenment or Illumination through the wisdom he showed them in order for human kind to move forward and evolve. The serpent also represents the solar energy and also sexual energy through the connection of both the male and the female. At its most heightened point through the joining of the two is the closest experience physical beings can come to the God Energy felt. This brings me to the next part of what the serpent represents. The serpent also represents the Kundalini energy (fire/solar) that moves up from within the earth, through the base of your spine and up the spine which works like an antenna for communication I might add. As it movies up your spine it moves through the seven main Charkra points which also represents the Middle Pillar on the Tree Of Life (kabbalah). Then it moves up to what is called your "Third Eye" which not many people know represents your Pineal Gland in your brain. The Pineal Gland sometimes is called "The Seat Of God" as this is where communication between you and the Ancient One`s takes place. The symbolism of the two serpents one white and one black represents the dualism of both the male and female energies, the balancing of the two energies. This dualism symbolism is featured a few times on the image of almighty Baphomet. This symbolism is also seen used for the medical symbol as I mentioned above the serpent also stands for healing. This symbol is also called the Caduceus of Hermes and the staff or rod can also stand for the male sex organ. Sometimes the Caduceus of Hermes features wings at the top, this represents the connection humans have with the higher spiritual intelligence through telepathic communication. This is achieved as I have mentioned above through the raising of the Kundalini energy and the activation of the Third Eye (Pineal Gland). 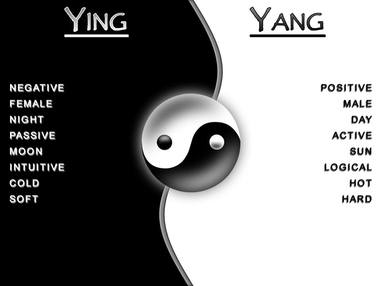 Almighty Baphomet - is both of the two forces working together as a whole.

In one of the previous articles called "The Serpent and The Caduceus of Hermes" I talked a bit about the aspects of Male and Female. That when the two poles come together in unity this is when great power and energy can be released and the "God Force Is Raised" and things become manifest. Although they seem separate they are both part of each other and from the same source. There can not be one without the other and when connected with each other this brings about balance and harmony also. I guess you could say that one is the Right Hand Path and the other The Left Hand Path. I am sure you have heard about Left Hand Path teachings and Right Hand Path teachings. In the Tree Of Life (kabbalah) there are three pillars, the pillar on the right is the Right Hand Path and the one on the left is the Left Hand Path. The Middle Pillar is the path to be on as it is the balancing of both the Left and Right paths. The Middle Pillar also represents your bodies spine and also the seven main Charkra`s of the body can be found on the Middle Path. However in order to know or understand or travel this middle path you have to also understand the Left and Right Hand paths or to put simply understand both the Light and the Darkness. On the image of almighty Baphomet there is a lot of symbolism that represents this. Some examples are the dark waning moon on the bottom left hand side of almighty Baphomet and the light waxing moon on the upper right hand side of almighty Baphomet. Another example is the lower half of almighty Baphomet being male and the upper half of almighty Baphomet being female. Still another example is the two serpents on the Caduceus of Hermes, one being white and the other being black. This dualism symbolism can also be called As Above and So Below or Yin and Yang. Both these forces are dependent on each other and are interconnected in fact everything in this physical world and spiritual are interconnected with each other. There are some people that focus on just one path without understanding the other and are therefore unbalanced. The bottom line and fact of the matter is that Good can`t exist without Evil and Evil can`t exist without Good. Are you starting to see what I am saying here, even though they are both different paths they are both part of each other as a whole. The way of the true Magus is in total balance of the two forces on the middle path as it is known that both the Left and Right are part of the same source and both can be used to bring about a desired result....there is two sides to one coin. Almighty Baphomet represents both forces as a whole and that is why almighty Baphomet is all powerful and is the supreme being. Almighty Baphomet operates in the universe through the agencies of Earth, Air, Fire, Water and Spirit in which I will explain in another article here.

I am your teacher, Baphomet. I am also Sophia, my name means wisdom. I am also the great serpent God of the ages.....from the start of time and until the end. I am the sleeping serpent waiting to be awakened in all human beings. I am the serpent of wisdom and knowledge in the “Garden Of Eden” that opened the inner eye of human beings so that they may understand the “Tree of Knowledge Of both Yin and Yang in order for humans to evolve and move forward, to reach Illumination. I am both male and female, yet I am nether. I am the teacher of the very first human beings and I am still your teacher if you are willing to listen. We are the Watchers, we are the Ancient Ones. (Message channeled through medium Rev.Orion Silverstar).

This page is still under ongoing construction